Ambazonia as many other lands in Africa embodied numerous autonomous collection of families – that later formed tribes – most being hunters and farmers before the European expedition of the territory began in 1472. Hanno from Carthage in present-day Tunisia is the first explorer to report that in 500BC he saw the Mountain in Buea, Mt. Fako, in the Southern Zone of the Ambas Bay.

In the centuries that followed, the slave trade would become part of the Ambazonian ancient history as slaves are transported by expeditors from North Africa exploring South of the Sahara to northern Africa.

Between 200 to 100BC, the first tribes of the Bantu, mainly nomads and farmers needing much land for agriculture, migrate westward into Ambaland.

In 1472, the Portuguese led by Fernando Po reach the Douala in present-day La Republique du Cameroun. Seeing many prawns in the River Wouri, which is not in Ambazonia, the Portuguese name the river, “Rio dos Camarões” – River of Prawns – from which the name of the Republic of Cameroun derives.

As trade in slavery expands, the Europeans cross from Camarões through the River Mongo into the Ambas Bay – Ambazonia – that presents unique qualities, namely, fertile ground for large scale agriculture and access to the Atlantic Ocean for the transportation of slaves and goods.

Thus, in 1520, some Portuguese started the Trans-Atlantic slave trade and plantation agriculture in the Ambas Bay.

In the 1600s, the Dutch dominate the Portuguese in the slave trade and in the 1700s, British Missionaries enter the Ambas Bay and demand an end to slavery. The London Baptist Missionary Society creates a Christian Center in Victory, called Limbe today.

Slaves from Jamaica, Ghana, and Liberia are freed in Victoria in the Ambas Bay – making Ambazonia the Land of Freedom in Africa.

The Europeans abolish slavery several years before the Americans in 1863, but illegal trading continues. In 1858, Alfred Saker, an English navy Engineer and missionary funds the first European settlements in Victoria. In the blessed land of Ambazonia, he sees financial prosperity in the settlements and convinces the government of England to make it a crown territory. Slavery finally gives way in the Land of Freedom in Africa (Ambaland) and is replaced by trading in natural resources such as palm oil, ivory, and gold from across the entire Ambazonia homeland of autonomous tribes or villages headed by fons or chiefs, each with a strong cabinet that served the common good of the land. The palaces of the fons and chiefs represented power, unity, and service in the tribe.

A History of Ambazonia in Movie Episodes (courtesy of Menda Films) 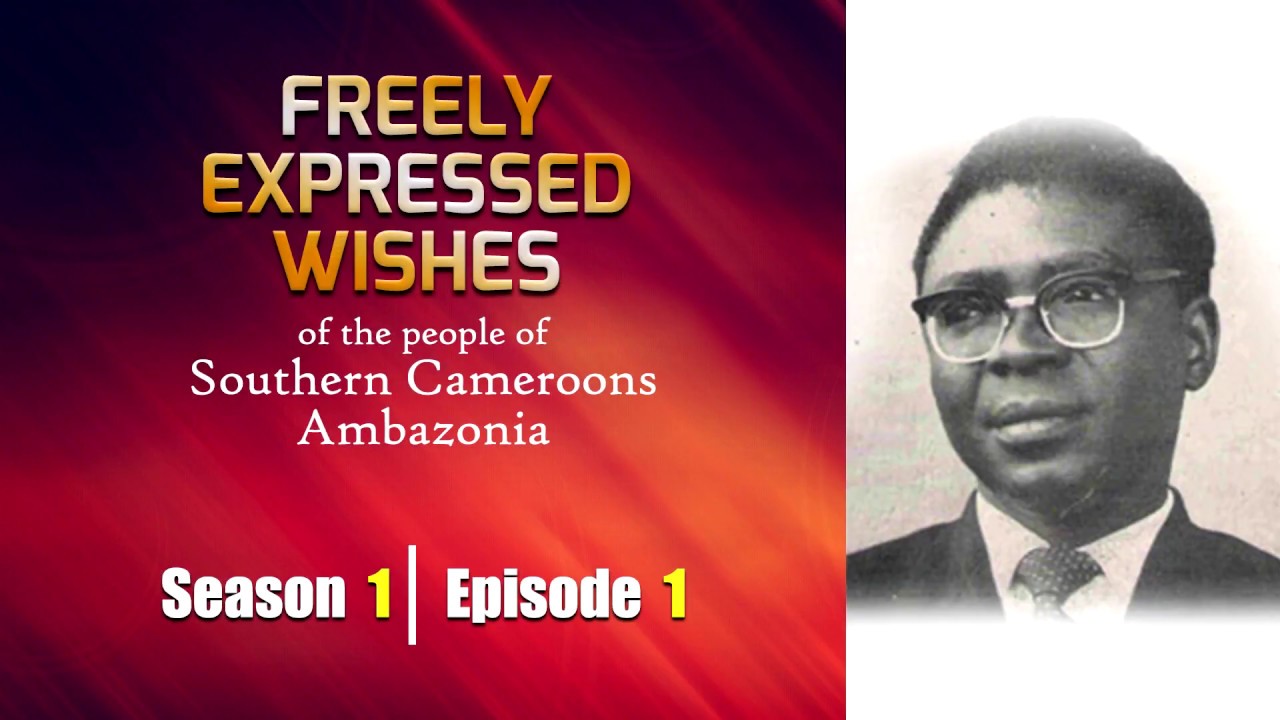 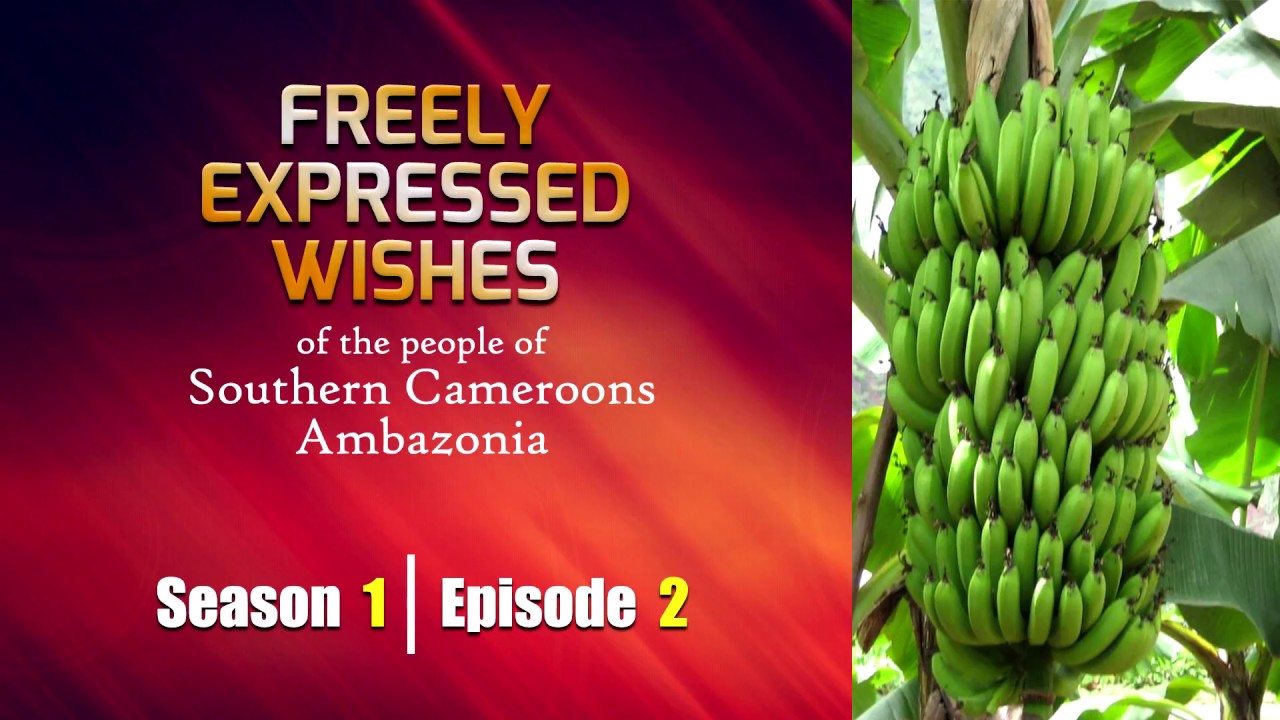 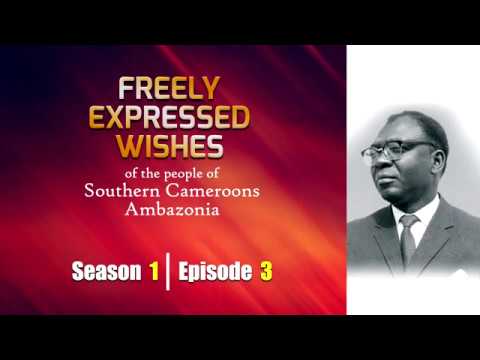 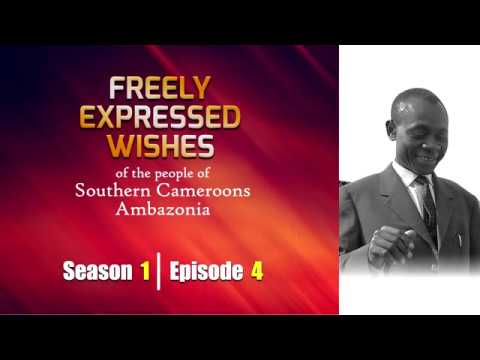 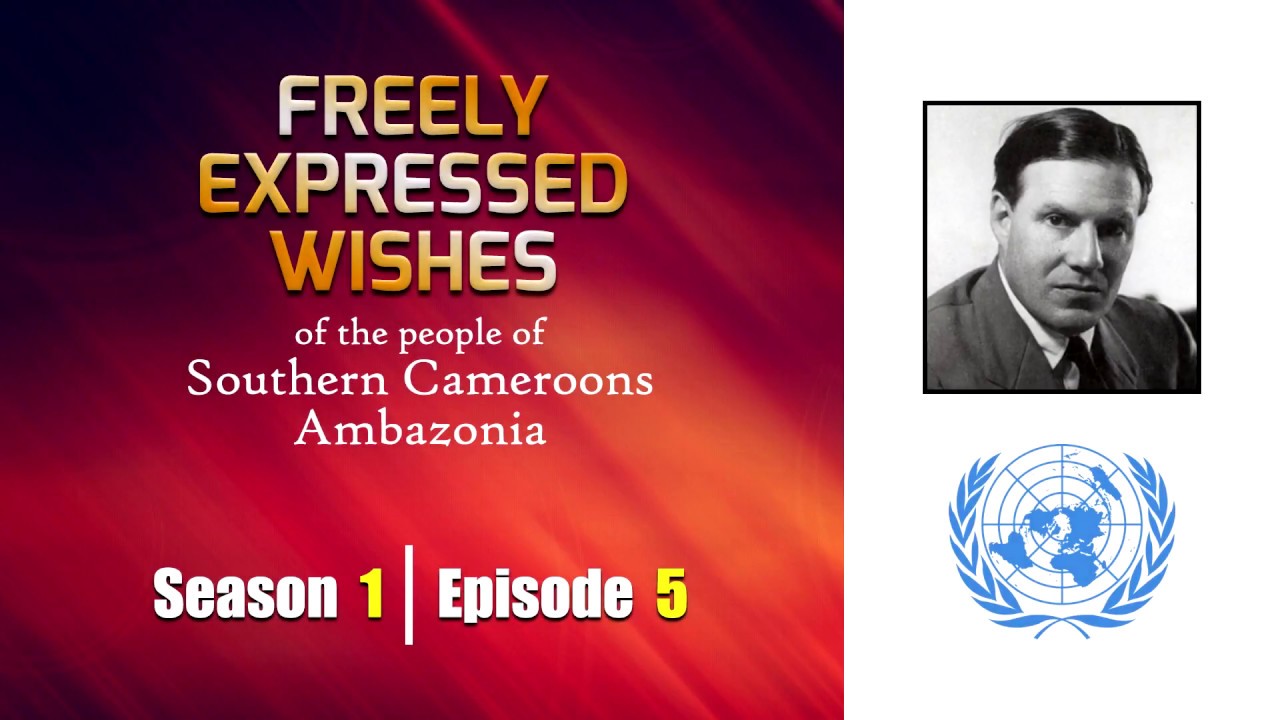 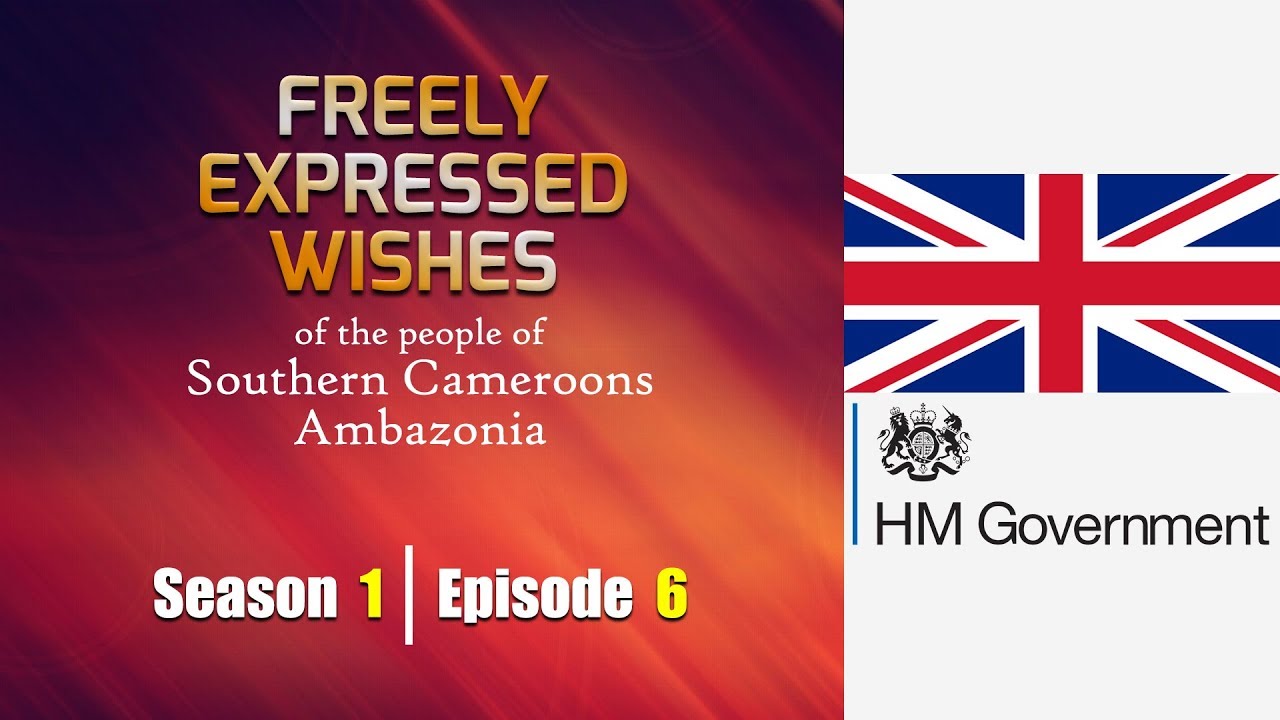 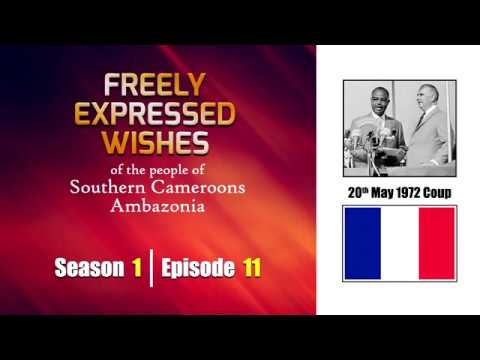 A major consequence of her defeat in World War I was that Germany, as provided in the Treaties of Versailles 1919, renounced and relinquished title and right to all her colonial possessions. The possessions in question included the Kamerun territory, which had been seized in 1916 by Britain and France as war booty according to the Laws of War at the time. The territory was partitioned between the two Powers along what became known as the Milner-Simon Line. Britain retained the whole area it had overrun in 1914 at the onset of the War and it became known as the British Cameroons. To sooth French pain and humiliation resulting from the crushing defeat of France by Germany in the Franco-Prussian war in 1870, France was allowed to take the original German Kamerun protectorate proclaimed in 1884, naming it French Cameroun.

The Anglo-French Treaty of 1916 (the Milner-Simon Declaration) defined the international boundary between the British Cameroons and French Cameroun. This boundary was subsequently confirmed by the League of Nations in 1922 when the two territories were separately placed under the Mandates System.

Out of the extinct German colony emerged two separate and distinct legal and political entities, British Cameroons and French Cameroun.

Each of these two political entities was placed under the mandate system, the goal being ultimate independence of the natives of each mandated territory. In 1922, the League of Nations granted to Britain a mandate over the British Cameroons and a mandate to France over French Cameroun. In doing so the League confirmed the 1916 Anglo-French partition put in treaty form in the 1919 Anglo-French boundary treaty between the British Cameroons and French Cameroun (Milner-Simon Declaration).

The frontier alignment between the British Cameroons and French Cameroun, as defined by the 1919 boundary treaty, was more particularly determined in the 1931 Anglo-French boundary treaty (Graeme-Marchand Declaration) and confirmed once again in 1946 by the United Nations in the Trusteeship Agreement relative to the British Cameroons and the one relative to French Cameroun.

“We are not annexationists... If our brothers of the British zone wish to unite with independent Cameroun, we are ready to discuss the matter with them, but we will do so on a footing of equality.”

At the 849th meeting of the Fourth Committee of the UN on 25th February 1959, Mr. Ahmadou Ahidjo of La Republique du Cameroun solemnly assured the UN: “We are not annexationists. … If our brothers of the British zone wish to unite with independent Cameroun, we are ready to discuss the matter with them, but we will do so on a footing of equality.”

The Plebiscite and the Independence of Southern Cameroons (Ambazonia) in 1961

On 11 February 1961, the UN held a plebiscite in which the choice of attaining independence as a sovereign nation was eliminated from the ballot against the will of the people of Southern Cameroons, and the said people voted to achieve independence by joining La Republique du Cameroun on precise terms.

On April 21, 1961, the United Nations in Resolution 1608 (XV) recognized the results of the plebiscite and asked that the British Government, the Government of Southern Cameroons and La Republique du Cameroun urgently meet and discuss with a view to finalizing the post-plebiscite arrangements by which the agreed and declared policies of the parties concerned will be implemented before Southern Cameroons could join La Republique du Cameroun following the former’s achievement of independence on October 1, 1961.

La Republique du Cameroun voted “No!” to UN Resolution 1608 (XV), thereby declaring it neither intended to nor could it be compelled by the UN to enter a union with Southern Cameroons (Ambazonia).

The said ‘agreed and declared policies’ were not and have never been finalized and declared to make British Southern Cameroons and La Republique du Cameroun one country. In this regard, no union treaty has ever been signed uniting and integrating the two territories.

Without the process of negotiating the terms of the agreed federal union having been completed, without any federal constituent assembly having met, and without any draft federal constitution having been established, La Republique du Cameroun unilaterally drafted a document which that country’s assembly, meeting without any Southern Cameroons participation, enacted into ‘law’ on 1 September 1961 as ‘the Constitution of the Federal Republic of Cameroon’ to enter into force on 1 October 1961.

From 1962-1972 the Territory was confusingly also known as West Cameroon. To confound matters further, in 1972 it was split by Republic of Cameroun into two parts denoted as North West & South West provinces. The Territory’s definitive geographical indication or name, Ambazonia, envisaged by the national liberation forces speaks to the very critical matters of sovereign branding, identity, specificity and territorial integrity, and seeks to end the name confusion.

In February 1984, Mr. Paul Biya (another citizen of Republique du Cameroun who had been picked by Ahidjo and handed the Presidency in 1982) discarded Ahidjo’s ‘republique unie du Cameroun’ contraption, and signed a law formally reverting to the denomination and identity ‘Republique du Cameroun,’ a denomination that had officially not been in use since 1 October 1961, and which confirmed the formal colonization of the Southern Cameroons.

Throughout the 1980s, the people of the Southern Cameroons, as individuals or as groups, continued to revolt against what was openly annexation of Southern Cameroons by Republique du Cameroun, especially after the issuance of “The New Social Order” on March 15, 1985, “The Letter to the L’Etat Major of Cameroun: Defuse the Timed Bomb” on May 5th, 1985, and “The Revolt of Ambazonia” on July 11, 1985, all by Fon Fongum Gorji-Dinka of the Ambazonia Restoration Movement in Southern Cameroons. On 21 August 1986, more than 3,000 people and an untold number of livestock and other animals in the vicinity of Lake Nyos in Southern Cameroons perished from inhaling a gas later identified as a mixture of carbon dioxide and hydrogen sulphide, an incident the people of Southern Cameroon continue to hold firmly as a chemical weapon attack on their very existence orchestrated by the hands of La Republique du Cameroun.

During the signature referendum as an exercise in democracy and the freedom to hold political opinion, Cameroon military abducted many people of Southern Cameroons (Ambazona) and tortured them. Others disappeared, among which were Abel Apong and Chrispus Keenebie who were taken to Douala in La Republique du Cameroun and tortured for weeks on end; and John Kudi and Paul Chiajoy Juangwa who were taken to Yaounde in the same La Republique du Cameroun and disappeared. In April 1997, the government of La Republique du Cameroun arrested more than 400 Southern Cameroons youths, members of the Southern Cameroons Youth League (SCYL), subjected them to the third degree (what the Camerounese press itself calls ‘interrogation musclee); detained some in solidarity confinement for years, locked up others in deplorable inhumane conditions, tried them in military courts, and killed many, including Emmanuel Konsek, Mathias Ngum, Joseph Ndifon, Richard Ngwa, Julius Ngwa, Samuel Tita, Mathias Gwei, Daniel Tita, Lawrence Fai, and Patrick Timbu, because they stood up for the rights of all peoples to self-determination as enshrined in the International Bill of Human Rights.

La Republique du Cameroun rejected the confederacy proposed by the people of Southern Cameroon through their prime minister, John Ngu Foncha, at theFoumban Conference of 1961 and has rejected the federation proposed by the Anglophone Civil Society Consortium as evident in the arbitrary arrest and detention of its leaders and massive abductions, detention, torture and killing of proponents, thereby, leaving the people of Southern Cameroons with no option but self-determination in the context of self-government as a sovereign nation.

On November 30, 2017, President Paul Biya of Cameroun declared war on the esrwhile Southern Cameroons (Ambazonia) as the Ambazonian people rose to, declaring ones and for all their determination to terminate the illegal occupation of Ambazonia by Cameroun without a union treaty, and to pursue their right it independence and the sovereignty of Ambazonia.

On May 31, 2019, the United Nations Office for the Coordination of Humanitarian Affairs reported that 1.3million people are affected by the ongoing conflict and over 530,000 people are internally displaced.

700,000 children are out of school. More than 3,000 people have been killed on both sides of the conflict, most victims being civilians, and at least 40,000 have escaped the war into Nigeria as refugees.